How Apple relies on Amazon for Cloud Services

iCloud, like most of us know, is a cloud storage and cloud computing service provided by Apple Inc. But did you know that iCloud operates on nearly 1.5 billion devices worldwide? This number continues to grow year after year, with the rise in Apple’s sales. 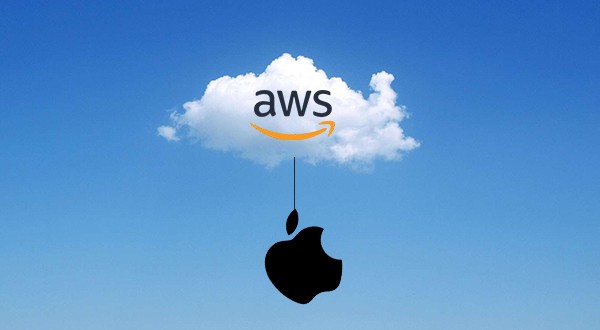 The conjecture around Apple using AWS does not seem to have any conclusions. This is why we’re presenting you with facts that will clear your doubt.

How does the iCloud operate?
Apple is great with hardware and software interfaces but when it comes to cloud storage, photo management, or social networks, it just seems to be doing okay. iCloud by Apple was launched in 2011, to allow Apple users to save and share data in the form of photos, videos, music, documents, and app data.

Gradually, it introduced more features like wireless sharing of data through AirDrop, automatic data syncing for emails, contacts, calendars, bookmarks, notes, reminders, iWork documents, photos, and other such data. And all of this is backed by Apple’s 11 owned and operated data centers that support iCloud services.

Does Apple use AWS for Cloud Services?

Key Pointers:
– Apple has a major multi-year agreement with Amazon Web Services.
– Apple spends way more on Amazon’s cloud than any other company.

Starting right back in 2011, iCloud has been based on AWS and Azure. This was acknowledged by Apple in 2014 as well. From there on, in 2016, Apple also signed a deal with Google to use its cloud platform for some iCloud services. Now, we are aware that Apple and Amazon have been competing for a greater share of consumer dollars and attention, but it is also true that they have a particularly intimate business relationship. This is because Apple spends over $30 million a month on Amazon’s cloud.

Backing this with facts, we already know that the company relies on Amazon Web Services for its cloud services. In a February job posting in 2019, Apple itself stated that the company was looking for someone to lead and architect their growing AWS footprint.

By the end of March 2019, Apple’s spending on AWS was on track to average more than $30 million a month. This is 10% higher than a year earlier. The fact is that if Apple’s use of AWS stayed on these levels, its annual spending would have exceeded $360 million in 2020. And as stated by a source of CNBC, in 2019, Apple signed an agreement that included a commitment to spend at least $1.5 billion on AWS over the course of 5 years.

Amazon Web Services for the Win
AWS is a major part of Amazon’s business. In 2020, AWS delivered $12.7 billion as compared to $9.95 billion from a year earlier and the subsidiary’s revenue represented 10% of Amazon’s total sales. And even though Apple is one of the top AWS customers, its payments only make up a tiny slice of Amazon’s overall revenue. Amazon also has an increasing amount of money that customers have committed for the use of its services in the future, primarily tied to AWS.

What the Cloud Computing Industry Expects to Face in 2022?